Seattle Pacific University held a symposium on Ferguson and race relations with a panelist of four professors. Upon hearing of the event I posted the event flyer on the door to my office, hoping the University would use this event platform to bring justice to Michael Brown by allowing his spirit to live on through the voices of our academic community.  Immediately prior to attending the event, I drank tea at Storyville, a boutique coffee shop that reeks of privilege and safety, located atop the trendy, and upscale Queen Anne hill of Seattle. A quote on the wall taunted me the entire time I was there. It read “Love everybody, never ever hurt anybody.” In an ultimate paradox I left the coffee shop for the event eager to discuss institutionalized racism, and how it continues to hurt so many. 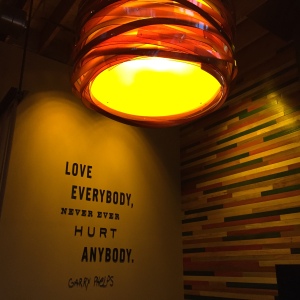 As I walked on campus I noticed the school motto plastered on all of the banners; “Engaging the culture. Changing the world.” I couldn’t help but wonder how students could dutifully engage our culture and make systemic change to the post-racial status of our world while attending a University where everyone within senior leadership is White. The University took a giant step in the right direction for the predominantly white, privileged higher education culture, by employing the voices and intellect of well-liked professors on our campus in hearing their thoughts and then allowing for a time of Q&A/reflection on Ferguson et al.

The first of four panelists (a white male) began the evening recounting an allegory from the book Divided by Faith; Evangelical Religion and The Problem of Race In America, admitting feelings of guilt in not fully realizing his own white privilege until reading this book in adulthood. He calmly related the police brutality seen today with some of the recent events to the horror he felt when first watching the videos of the Rodney King beatings.

Next to speak was Professor Brian Bantum (the only black person on the panel), a theologian who began by stating that his body shakes with rage when even thinking about Trayvon Martin, Jordan Davis, Michael Brown and others. His visceral bodily reaction was one that few others in the room could identify with (which may help to understand the demographic of the university). His passionate directive that “our society was founded on the inhumane treatment of dark bodies” made some audience members wriggle in their seats, while others – primarily members of SPU’s Black Student Union – let out cries in agreeance. He implored students to rise above complacency and to acknowledge that “Darren Wilson is either a criminal or really bad at his job” adding that passivity is what is killing blacks.

While hoping for more racial diversity amongst the panel, I understood that in order for people to feel safe and thus truly moved to action it makes sense psychologically to hear the call from someone who racially mirrors ourselves. Tonight’s well attended and robust event was a clear indication that SPU has a community of students who want to make change, but who first need to learn more about how their own privilege may stand in the way of garnering true change. Black folks aren’t asking how to feel angry by Ferguson or Trayvon Martin it’s practically innate, but this question was voiced anonymously (via texting in questions) tonight. I can only assume that many student’s feel stunted in their action (or lack thereof) out of this same fear as well.

Rather than the current lofty and unclear motto, perhaps a more inclusive tagline, targeted toward our specific student body could read; “Engage the culture. Become an ally.” Ally’s are people who band together towards a common cause regardless of whether or not they are directly impacted. In other words, they don’t need to be Black in order to feel raw emotion about Ferguson and seeing images of police traumatizing an already broken town with tanks and military weapons. Similarly, one doesn’t need to be adopted to feel outrage towards an adoptee’s loss of their basic human rights, like knowing the identity of their natural parents.

Knowing that white privilege is largely invisible to those who have it, I can’t help but wonder how tonight’s symposium will impact our predominantly white student body. Will white, middle-class students feel moved to become an ally to those suffering the first hand injustices in the US? Would our students readily go join in the protests with those in Ferguson?

Change begins with great leadership. It looks like we are in good hands with a transparent [Caucasian] president who is obviously committed to engaging in discussions about race relations.

2 thoughts on “Engage The Culture. Be An Ally.”